So today I want to talk a little bit about my Queer Origin Story. The whole story is long and sordid and probably quite boring, honestly, but I want to talk specifically about books.

Okay, first, go read this post by E.E. Ottoman on getting queer romances into local libraries, because it’s a great post, and their questions at the end got me thinking about my history with queer books, and how important they were to me.

Like a lot of authors, I was a voracious reader as a child. I started with the Magic Tree House books in grade three and basically never stopped. My mother took me to the public library in our town (which, looking back, was pretty damn huge and awesome, thought I didn’t realise it at the time) and I took out a stack of books every few weeks, and read through them in short order. My mom often joked that we were keeping the place in business with all the late fees we paid, but at least that didn’t stop her from taking me.

This is what the library in my hometown looks like, by the way. It’s kind of like a giant, rectangular geode.

I continued reading all the way into high-school, when I made my way from the children’s section of the library over to the special “teen” section. And it was there, and in my high-school library, that I first encountered queer characters.

I wish I could remember the names of the books I read. Have this quote by Neil Gaiman instead:

“Stories you read when you’re the right age never quite leave you. You may forget who wrote them or what the story was called. Sometimes you’ll forget precisely what happened, but if a story touches you it will stay with you, haunting the places in your mind that you rarely ever visit.”
― Neil Gaiman

It’s pretty accurate. I remember the characters, the words, could even recite some of them probably. But I can’t remember the titles or the authors. Sometimes I’ll scour goodreads or amazon looking for them. But, like the quote says, they stayed with me, touched me, and left a very powerful nostalgia behind. In fact, most of the books I remember reading as a teenager had LGBT characters. I don’t know if it’s just because my libraries had a good selection of them, or because I was particularly drawn to LGBT stories, even though it often wasn’t hinted at in the blurb. I suspect though, that those are just the books I remember the strongest. The ones that really deeply affected me.

I grew up in a Christian household where homosexuals were people who made the choice to sin. I was taught to judge, to condemn, to pity. I grew up haughty, believing myself better than others because of my faith. But when I read these books, I saw the world through the characters’ eyes. I understood them, felt sympathy, even though in my mind I felt compelled to judge and condemn them. Maybe that conflict that happened in my mind every time I read a gay character is what caused them to be burnt into my subconscious. Without a doubt, it changed my opinions on homosexuality, which in turn made my own coming out just a little less painful. I didn’t actually believe I was evil, or that what I was doing and feeling was a sin. Why? Because I had read about characters like me. Characters who were good and normal and, every now and then, got to have their own happy end.

I absolutely believe that books can change people, and the world, for the better. I write queer characters not just because I enjoy them, but because I believe that through them, people might be able to gain sympathy for others, and understanding of themselves. And as a kid, libraries were my pathway to those books. I’ll be forever grateful to the authors of those books, and the librarians who made them available to me.

Promo time! My book, To Summon Nightmares, which features a bisexual transgender main character, a fairly evil demon, a really evil organisation, some bad-ass ladies, and quite a few more summoning rituals than is widely recommended, is out November 5th. 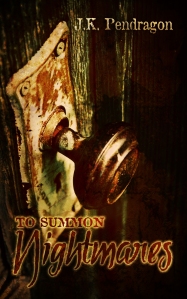 Three years ago, Cohen Brandwein was “Ireland’s Favorite Daughter”, a popular teenage author and internet celebrity. But ever since he came out publicly as trans, the media’s treatment of him has been less than golden, and these days, Cohen is desperate for escape.

When he inherits an old house in the country, Cohen sees it as a perfect opportunity to escape the press and work on his new book. What he doesn’t count on is becoming embroiled in a small town murder mystery and falling for the primary suspect, a man whose reality makes Cohen’s fantasy books seem like child’s play…

Thanks for reading! Have another cat picture.

We bought her a new couch the other day. She’s very appreciative.

2 thoughts on “Libraries, Queer Books and Me”